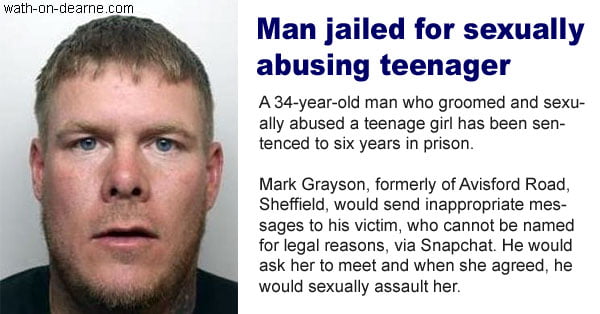 Police were alerted to Grayson’s crimes by the victim’s family, after she disclosed he had been engaging in sexual activity with her.

Investigating Officer Amy Todd, from Sheffield’s Protecting Vulnerable People Investigation Unit, said: “Grayson is a man in his 30s, who befriended then groomed a girl who was under 16-years-old for his own sexual gratification.

“Grayson’s victim believed she was in a consensual relationship with him, such was the extent of his manipulation. We know that this can be the heart-breaking reality of sexual exploitation, young vulnerable people are tricked into believing that what is happening to them is part of a loving relationship.

“Sexual exploitation and abuse can have a devastating impact on victims, and I wish to recognise the bravery of the victim in this case.”

Grayson appeared at Sheffield Crown Court on Thursday 30 June where he was jailed for six years and given a lifelong Sexual Harm Prevention Order (SHPO) preventing him from having any prolonged contact with any child under 16-years-old. He was found guilty of two counts of engaging in sexual activity with a girl aged 13-15 at trial.