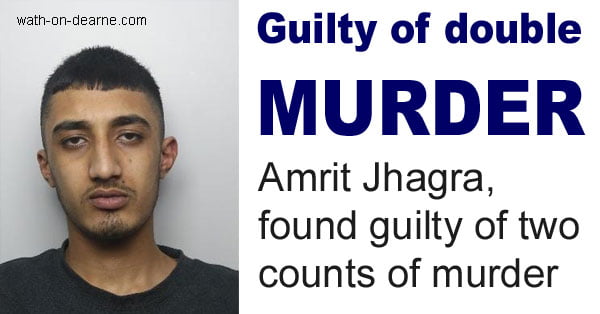 A Doncaster man has today (21 July) been found guilty of murdering a man and a teenager in Doncaster town centre earlier this year.

At around 2.30am on Saturday 29 January 2022, the victims Janis Kozlovskis, aged 17, and Ryan Theobald, aged 20, were outside a bar on Silver Street, when there was an altercation.

Detective Chief Inspector Lee Townley, senior investigating officer, said: “Both Ryan and Janis left the bar which they had been in with friends shortly after 2.30am.

“Once outside, a fight began between Janis and a friend of the defendant Amrit Jhagra (pictured right), which carried on as they moved along Silver Street.

“A few minutes later, Ryan ended up in the midst of the altercation. As they reached the corner of Silver Street and High Street, CCTV footage shows that Ryan was approached by Jhagra, who stabbed him and left him lying in the street.

“As Janis ran down the street, he was chased by Jhagra, who pulled him to the ground and stabbed him multiple times before fleeing the scene.”

Emergency services were called by members of the public, but despite the best efforts of officers and paramedics, Ryan was pronounced dead at the scene and Janis died in hospital a short time later. A post-mortem examination revealed that Ryan died of a single stab wound, and Janis died of multiple stab wounds.

A murder investigation was immediately launched to identify the person responsible.

DCI Townley added: “Enquiries found that Jhagra had fled to a nearby hotel following the incident, before travelling via taxi to a friend’s house and going on the run. On 2 February, he handed himself in to police and was arrested on suspicion of both Ryan and Janis’ murders.”

Jhagra, 19, was further arrested for possession of an offensive weapon. He charged with all three offences on 3 February.

DCI Townley continued: “I would like to offer my condolences to the families and friends of both Ryan and Janis as these proceedings will undoubtedly have been both difficult and distressing for them.

“Throughout this trial, the defendant has claimed that he acted in self-defence of his friend, however, Jhagra went out that evening in possession of a knife and he went on to use it to stab not just one but two people.

“This case lies bare the heart-breaking implications of knife crime, and I am pleased that the jury saw through Jhagra’s lies and that he will now face a lengthy time behind bars.”

Jhagra, formerly of Cedar Road, has been on trial at Sheffield Crown Court since 11 July. Today, after just four hours of deliberation, a jury found him guilty of two charges of murder, and possession of an offensive weapon. He will reappear before Sheffield Crown Court on 18 August for sentencing. 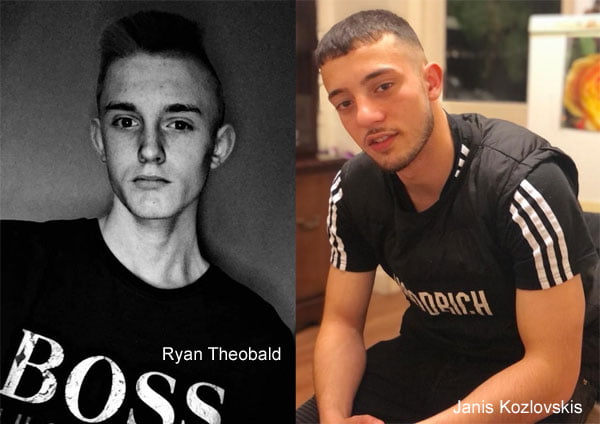 Janis’ sister, Russanda Kozlovskis, also paid tribute to her brother: “As Janis’ sister I would like to add the following on behalf of my family and my parents.

“We have lost a loving son and brother. Janis was just coming into adulthood and he had his whole life in front of him.

“As a family, we would like to thank the jury for their guilty verdict. However, Janis is still gone forever. He will never fulfil his hopes and dreams and we as a family will never see the man he would have become.

“It was all tragically taken from us, in a matter of seconds, by the actions of one person, who decided to stab Janis and his friend, Ryan, to death in the middle of the street. More so than ever this just goes to show the devastation that arises from people illegally carrying and using knives, often over the most trivial of incidents.

“Although this offers some form of closure and we know that the defendant will spend many years in jail, we will never get over the loss of Janis.

“We would like to extend our thanks to the Police, Prosecution Team and the Jury for bringing us the justice which Janis and Ryan deserve.”

Ryan’s mother, Lisa Theobald, has today paid tribute to her son: “I as Ryan’s mother would like to thank the Jury for the verdict they have arrived at.

“Nothing can make those members of the jury, us as his family and friends or those who have watched from the public gallery ‘un-see’ the lives of Ryan and his friend Janis being taken so tragically. Even with this verdict, nothing will bring my son back.

“As Ryan’s family we will forever miss him and seeing the man he would have become.”

Lisa added: “Ryan had previously told me he was scared of knives. He had known locally others who had been victims of knife crime. I would implore those who carry knives or blades, for whatever reason, please don’t. You are someone’s son, brother, loved one, friend.

“I would not wish what we are going through upon any other family.”